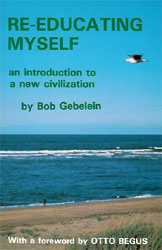 An Introduction to a New Civilization

The threat of nuclear annihilation was to me proof of total systems failure, not of the technology, but of the culture that produced it. Because of this and other major cultural problems, I turned my back on the culture in 1955, at age 21, and set out to design a new civilization.

“New civilization” is the best expression I could think of to mean new values, new beliefs, new ideals, new goals, a new “standard of living,” a new way of thinking, and a new way of life.

A “civilization” is not just cities and buildings and large numbers of people. A civilization is basically a set of ideas that determine what those people build and how they live their lives. The “civilization,” to me, was what had been programmed into my head as a representative product of the American upper middle class. To create a new civilization, all I had to do was change that programming.

My methods were psychotherapy, withdrawal (a la Toynbee), and dream analysis, taking advantage of the self-steering process. I discovered the psychological age of puberty, a transition point where “human nature” itself changes, from the self-interest of the child to an equally natural desire to give and share. If a majority of people reached this point, we would have a new civilization.

RE-EDUCATING MYSELF documents this search and the answers that I found.

The fact that I embarked on this search and actually succeeded should have been newsworthy when this book was published in 1985. But most people simply did not know what to make of it. A gifted few praised the book highly, but still I have no evidence that anyone really understood what I was saying. Try harder. I did the best job of writing that I could. The rest is up to you.

“The philosophy in your book is wonderful. Congratulations!”

— The Bulletin of the National Alliance for Spiritual Growth

“If you are forging your way on whatever frontiers of being, I heartily recommend this story by another explorer.”

— The Philosopher’s Stone, The Stelle Group

“As a philosophy student at [my university], I’ve felt trapped in disputes over trivial questions. So far, I’ve found Re-Educating Myself to be a refreshing exploration of the central questions of life. It is also an inspiring, honest account of one person’s quest for personal maturity.” — name withheld by request

“I think it’s the best book I ever read.”