From a 2012 Interview in It’s Psychedelic Baby Magazine

Bob released one of the top notch loner folk LP’s back in 1974 as a private release. Today he is well known writer. We spoke about his music career as well as his career of a writer. 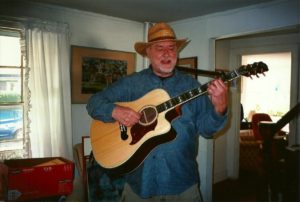 Bob! First I would like to ask you where did you grew up and what were some of your influences?

I grew up in Taunton, Massachusetts, where my father was a factory owner and later a bank president. We were “rich people” by the standards of a small manufacturing city. My mother’s family owned 3 houses in Provincetown, and we spent summers there. I also went to camp some summers in New Hampshire. I graduated from Milton Academy and Harvard. From the artists in Provincetown to the very rich at Milton to the intellectuals at Harvard, I had many influences, and never identified with any one social group. Later, when I wanted to withdraw from the culture and build my own philosophy, I found the solitude of Cape Cod winters to be the perfect environment and made Provincetown my year-round home — except when I had to go somewhere for a computer programming job to earn a living.

First of all, I was totally uncreative in my teenage years. I was psychologically 4 years old, and a jock, and voted “Most Modest” in my prep-school class. In 1955, at age 21, I saw the threat of nuclear annihilation as proof of total systems failure, so I turned my back on the culture and set out to design a new civilization. One of my first steps in that quest was to go through psychotherapy. I started writing songs at age 26, as one of the results of psychotherapy, as I began to develop my creativity. It seemed that I could get a better audience for my thoughts if I could sing them in a song, as Bob Dylan did. I can’t really express all my philosophy in songs, but at least you are getting a glimpse of it.

I read that you discovered how “human nature” it’s self can be changed to create a new civilization. In 1985, you self-published Re-Educating Myself: An Introduction to a New Civilization. You released another book called The Mental Environment. Would you like to present this book to our readers? Share some concepts with us…

Psychotherapy brought me from psychological-age-4 to psychological-age-10. (First of all, the field of psychology doesn’t know about psychological age. It is my discovery.) The psychiatrist said I was OK, and it was OK to stop “treatment.” I thought I was psychologically an adult. But a dream in 1966 showed me I was psychologically 10 years old, and that psychological-age-10 was actually normal for the culture. The field of psychology doesn’t know this, and if you have your PhD in psychology, you don’t know this — in fact, you have probably been steered far away from knowing this. But anyway, in the winter of 1966-67, influenced by “The Basic Writings of C.G. Jung,” I analyzed my own dreams, looking for Jung’s evidence of archetypes, and also trying to reach psychological maturity, to improve my relationships with women. After 3 months of intensive (24/7) dreaming and analysis, I reached what I call “the psychological age of puberty,” psychological-age-14, a transition point where “human nature” itself changes, from the natural self-interest of the child, to an equally natural desire to give and share and sacrifice oneself for others, which is more appropriate for the adult with children of one’s own to nurture and protect. (The psychologists don’t know about this, either, and their caste system forbids them from learning it from me, because I don’t have a PhD.) I estimate that in the present culture 5% of the adults have reached this level of psychological development. If a majority were to reach this level, we would have a new civilization.

I think people on drugs have reached this level of altruism while in the drug state. The only trouble with that is, as Baba Ram Dass has pointed out, you would have to stay high all the time. And in the real world, if you were high all the time, I wouldn’t want you to be coming down the road the other way.

Freud and Jung have been trashed. Since 1960, there has been the hypnotic implant, “Psychiatrists are tools of the Establishment.” (This is true only when the Establishment is paying them.) The psychologists themselves have been steered away from the study of the mind and dreams. That’s too bad, because psychotherapy is the way to a new civilization. It is hard work, it is painful, it is humiliating, and it is expensive. There must be a better way. No, there isn’t — not in the present culture, and not even in the present culture, which seems to be moving away from the tradition of Freud and Jung, which led me to where I am now. Read my books, if any of this interests you. There is also other stuff in my books that you didn’t learn in school.

You talked about New Age Movement and I would like to know what can you say about that movement?

I bought half a dozen books from IONS in 1995, and every single one of them rejected logic, science, ego, and psychotherapy, and trashed the words “truth” and “reality,” making them “your truth” and “your reality.” Since these are all foundations of my philosophy, we have a basic incompatibility here, with no explanation of why they reject all these things. On the other hand, one interviewer was saying to me, “You believe in reincarnation and karma. Aren’t these New Age beliefs?”

“The New Age Movement” is a big subject. Some of it I agree with, and some I don’t. Mostly, I am very suspicious of any information which comes from spirit entities, because some of them may be Black Mentalists, who are devoted to doing the world harm. Are there such entities? I don’t see New Age people even asking the question, or questioning the truth of any of the platitudes they are taking into their hearts and souls. I don’t see people using their minds. Edgar Cayce said, many times, “Mind is the builder.” Now, if you read the A.R.E. Catalogs, that statement has become totally twisted from what Edgar Cayce meant in his day: Use your mind to develop yourself spiritually.

This site uses Akismet to reduce spam. Learn how your comment data is processed.